Money Melts the Pounds Away -- an in-depth look at The Biggest Loser outcomes.

Obesity is a growing issue in the industrialized world generally and the United States in particular. The science behind obesity is still developing, but the popular culture response has already begun. Reality television, which has previously attempted to resolve our lovelessness, joblessness, and lack of fashion has now begun to confront the ‘American lifestyle.’ 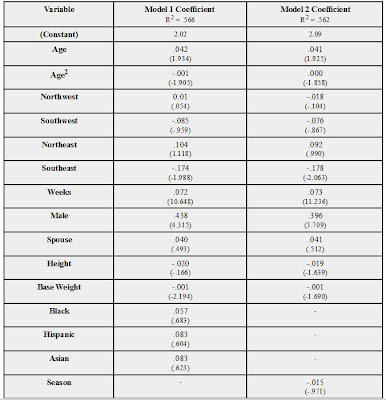 Irrelevant Variables:
Race: varying ethnic origins did not have a measurable impact on rate of weight loss. The majority of participants were white, and some ethnic groups (e.g. Asians) had very low representation, so statistical significance was hard to achieve.
Northwest, Southwest, Northeast: three of the location dummy variables did not have any statistically significant difference from the base case (the generic “Midwest”).
Season: not discussed much before, the season did not strongly impact weight loss.
Spouse: being married did not make a measurable difference. The contradictory factors at play for a married person canceled out, leaving the variable statistically irrelevant.
Relevant Variables: (in order of greatest statistical significance)
Weeks: as expected, staying on the show longer was a sign of faster weight loss. The extremely high t-stat for this variable shows that more weeks on campus corresponds almost exactly with higher rates of weight loss, other factors being constant.
Male: men had a substantial advantage in losing weight quickly. Anecdotal observation supports this – the majority of seasons were won by men, and most of the finalists were also men. Women did better in the later seasons, but men in general had the advantage.
Southeast: for whatever reason, people hailing from the southeast part of the country had a lower rate of weight loss. None of the other regional variables had a measurable impact, which makes this result especially surprising.
Age, Age2: as anticipated, an older and more mature person has an advantage, but at a certain point, the indignities of age start to impede weight loss.
Base Weight: a higher base weight correlates to lower rates of weight loss, other factors being held constant. While intuitively, it would seem that heavier players have more to lose and should drop it quickly, that was not evident in the data. Being in worse physical shape and having less stamina for sustained exercise was a disadvantage for heavier contestants.
Height: taller participants did not lose weight as quickly as shorter ones. Other factors being constant, a lower stature was an advantage.
CONCLUSION:
Combining all these factors together, we can generate a profile of the “perfect” Biggest Loser participant. Such a person would be: male, middle-aged, below average in height, and lack a Southern accent. Why? I'm not sure, ask a sociologist. My economics work here is done.

Questions, comments, or suggestions for more analysis are welcome.
Posted by Unknown at 4:14 PM