"Torture numbers, and they'll confess to anything."*

Our inquisitionist of the day hails from Bloomberg. In an article today, Venessa Wong wrote the following:

While many Americans dream of a windfall that will take care of their financial needs for life, the sobering reality is most of us are not getting far: U.S. Census Bureau data show median household income barely changed in the 10 years following 1998 as the price of housing and other goods increased. In consumer price index-adjusted dollars, the median household income in 2008 was $50,303, compared with $51,295 in 1998. [Emphasis added.]

What's wrong with the above? In a fairly common maneuver to paint a doom-and-gloom image of the times, average household size is treated as a constant to compare incomes over time. That just isn't the case. 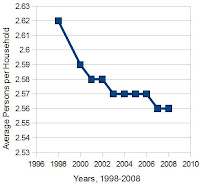 The problem with using 'median household income' as a measuring stick is that it's actually a factor of two other variables: combined income, and number of people per household. The latter aspect is conveniently overlooked by pessimists, who are looking to demonstrate a negative trend over time. When everything is considered, a different picture emerges.

In 1915, the average number of people sharing a house was 4.5. By 1967, that number had declined to about three. Greater mobility, less social pressure for early marriage, and a general rise in affluence all played a role in reducing the amount of people per household.  In other words, more kids are leaving the parents' basement, and more elderly people remain self-sufficient without their kids.

How does this impact the analysis by Ms. Wong? Based on Census Bureau data, there have been significant changes in persons per household, even in the limited span of 1998 to 2008. This is displayed in the graph above. In 1998, there were an average of 2.62 persons per household, and by 2008, that number was 2.56. When you're talking averages from a nation of 300 million people, those small differences add up quickly.

By performing some mundane mathematical operations, we can see what the statistics really say about income between 1998 and 2008. Correcting for changes in household size over that time, we find that the average income per household member actually went up, contrary to the dour picture from the Bloomberg article. An almost $100 gain per household member - averaged across the entire nation - isn't too bad (especially since it's adjusted for inflation and includes non-working people such as children).


It's fairly obvious why otherwise-intelligent people would overlook such a simple flaw in their statistics. The news headline "Things Generally Improving, but Slowly" doesn't sell much copy. Worry and concern is what draws readers, and if the numbers don't support that, they'll have to be twisted until they do.

*Quotation attributed to Gregg Easterbrook.
Posted by Unknown at 3:11 PM