Saw this on CNN today: Poor and fat: The real class war, by L.Z. Granderson. Some figures from the article:

Ground beef that is 80/20 is fattier but cheaper than 90/10. Ground turkey breast is leaner than the other two but is usually the more expensive. And many of us can't even begin to think about free-range chicken and organic produce -- food without pesticides and antibiotics that'll cost you a second mortgage in no time at all.
...The American Journal of Clinical Nutrition recently published a study that found $1 could buy 1,200 calories of potato chips but just 250 calories of vegetables and 170 calories of fresh fruit. And it is also true that Mississippi, the poorest state in the country, is also the fattest.
In fact, the five poorest states are also among the 10 fattest, and eight of the 10 poorest states are also among the 10 with the lowest life expectancy.
I guess one could dismiss this as one big coincidence, but is it also a coincidence that half of the top 10 states with the highest median incomes are also in the top 10 in life expectancy?

I would interpret Granderson's argument as: low-income leads to unhealthy foods leads to fat (leads to more healthcare spending and even lower incomes). Looking at calorie counts compared to food prices does seem to support that. However, bringing some micro theory into the discussion complicates this causal story somewhat. 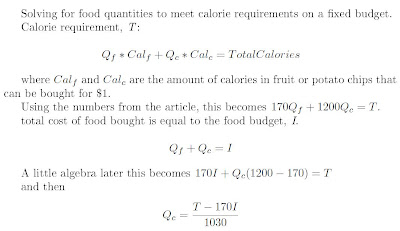 The same intuition is expressed graphically below. Purchasing decisions are represented by points where the red and blue lines cross. 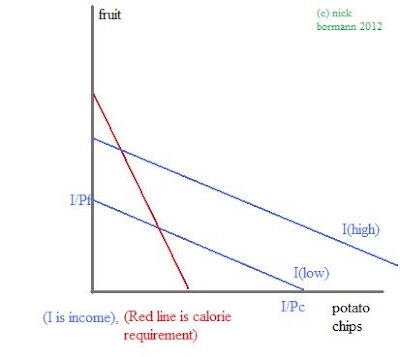 So far, so good: as one would expect, the high-income family buys more fruit and less potato chips than the low income family. One problem for this example, though, is that neither of these families will be gaining any weight!

If people only eat the necessary calories to keep an even weight, it won't matter whether their income is high or low. They'll just adjust their purchasing choices to get the right amount of calories. A dietitian might frown on you for eating chips as a snack instead of fruit, but as long as your consumption of chips is small, it won't necessarily cause you to gain weight.

It takes some extra assumptions to model over-eating. Maybe there's some property of potato chips that causes people to eat too much of them, i.e. what if someone buys potato chips thinking that a $1 serving will be 1200 calories, when it's actually equivalent to 1600 calories? Keeping with the numerical example above, the rich family would overeat by about 120 calories and the poor family by 560 calories.

It's only imperfect information or self-control problems which make food choices cause weight-gain. If we assume that low- and high-income types have exactly the same sort of bounded information, we'll find that the rich gain less weight, because their greater resources have them purchasing less unhealthy food to begin with.

This story gets even more pessimistic if there is some difference between low- and high-income people's capacity to overcome imperfect information. It might be that the poor have less time/energy to research and craft their diet than the rich do, so they are more prone to mistakes. Additionally, there could be some personal attribute - an impulsive nature or low conscientiousness - which both causes someone to have low income and also makes diet control more difficult.

While the costs of obesity are worth addressing given their heavy contribution to public healthcare spending, as Granderson rightly observes, the lens of class warfare isn't the best for understanding the problem.

Ultimately, to prevent obesity people need more incentive to monitor their own health. For me, it's knowing that on the current trajectory of public health care spending, there probably won't be any money left by the time I'm old and infirm. It doesn't entirely surprise that current beneficiaries of public health care are not too concerned about solving this spending problem for the rest of us (morbid fact: about a third of health care spending goes to patients in their last year of life). Which class is under attack, and which class is attacking anyway?

Maybe the obesity problem will resolve itself as young people make the calculations and figure they will likely be on their own, in terms of medical care, by the time it is most necessary. Or maybe the lure of potato chips is simply too great for us as a nation and will lead to our fiscal undoing.
Posted by Unknown at 2:20 PM