Yesterday ALDO featured an online sale, with a promotion code giving $10 off any order plus free shipping. Today, apparently, they're rethinking that decision after seeing the predictable result: the code was distributed on a deals site, and lots of people ordered items in the $12-$15 range to get them for $2 to $5.

I'm guessing about 10,000 people just got a terse note like this one: "we unfortunately realized the promotion code you applied was only valid on footwear and was not valid on accessories or handbags. As a result, we regretfully had to cancel your order." Unfortunately, indeed.

Obviously a clever web developer could have set up their shopping cart system so that the coupon code could only be used in the "Shoes" category, but they didn't. So now a bunch of hopeful consumers are having their hopes of a good deal dashed the day afterwards. I wonder how much money ALDO stood to lose from this technical screw-up to justify committing such a customer service faux pas?

Here's a snapshot of the carnage on ALDO's Facebook right now: 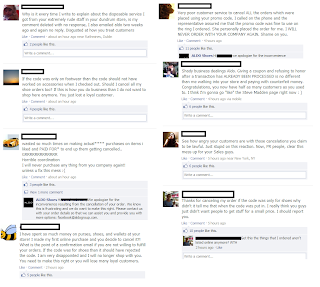 ...And it continues. The entire page reads like a social media strategist's nightmare.

The bland, "sorry for the inconvenience..." boilerplate replies don't help much either. It's not an "inconvenience" -- that would be something that happened by accident. The decision to cancel everyone's order was clear and deliberate, so some genuine contrition might be in order for wasting lots of people's time and energy.

Social Media 101: own up to your mistakes. Right now people just aren't buying it. My own impression of ALDO as a company, while non-existent before, is now purely negative. On the plus side, if I ever publish on social media strategy again, I've got another "what not to do" example ready and waiting.
Posted by Unknown at 7:11 PM